Jack and Sara in Moria

We recorded a video to show you what it's like to volunteer in Moria.

I am thankful for the many donations we have received over the last week towards the campaign we started to get underwear and socks. This is our way to say THANK YOU!

I spent 3 hours subtitling the video in English so please turn on subtitles :)

It's been hard to find time to come and post some news. I beat myself up for not doing it often, but truth is I can't stretch my days. I simply don't have time to do it. Shifts have been hard. They were specially hard on the second week. Snowed most days and I barely had the energy to keep myself moving.

Some days I wake up and I even find myself being happy and peaceful. Others, like today, it's very hard. As I'm sitting on my computer, at a café in the port, I read news about another boat sinking and 40 people being dead. I look to the sea and think "this is happening right here". It's a hard thing to grasp.

Some events knocked me out in the last few days.
On one of the days that it was snowing, a woman approached me with a baby on each arm and asked me for help, in perfect english, regarding what her next step is, after getting the registration papers. I told her she needs to get the bus to the port and buy a ferry ticket to Athens, but I know there's a ferry strike, and as so, she might only be able to buy a ticket to travel 2 days after. I write on a piece of paper the name "Kara Tepe". It's the camp where Syrians and Iraqis can go and stay, get some food and rest. I tell her to go there after buying her ticket. I carry one of her babies to the bus stop and we wait together for the bus to arrive. She tells me her husband did the trip a few months before and he has reached Germany and now it's their turn to join him. the bus arrives, I leave the three of them and go back to work. And then it hits me! Here was a clear situation in which I could have done so much more to help. And I didn't! It was a perfect opportunity and I missed it. I could have travelled with her to the port to buy her ticket and then help her with the kids and her bags. Pay for a hotel, give her a place to rest... I missed a golden opportunity. I could have really helped her! I went to the port a few hours later and tried to find her. I didn't see her. I like to think some other person noticed this struggling woman and helped her. But what if no one did? It's been over a week and I still wonder how she is. How she will manage to do the whole journey to Germany...

Here's some photos of your week: 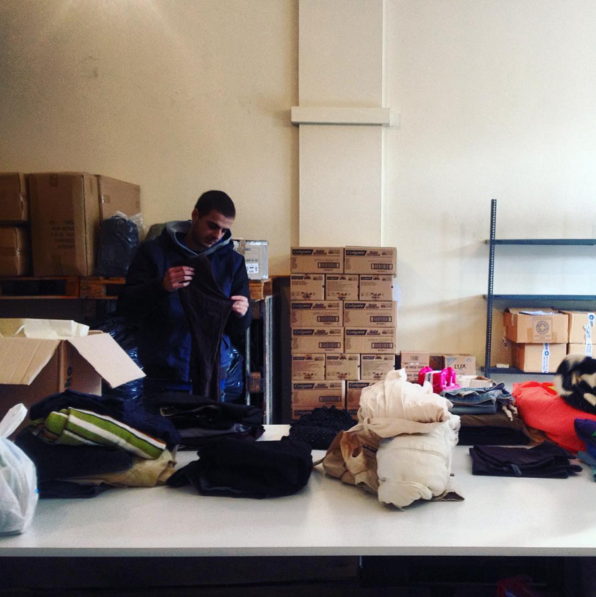 We spent a lot of time this week organising donations. With the cold weather, less boats arrive, making it the perfect time to go to the warehouse and prepare for busy days. 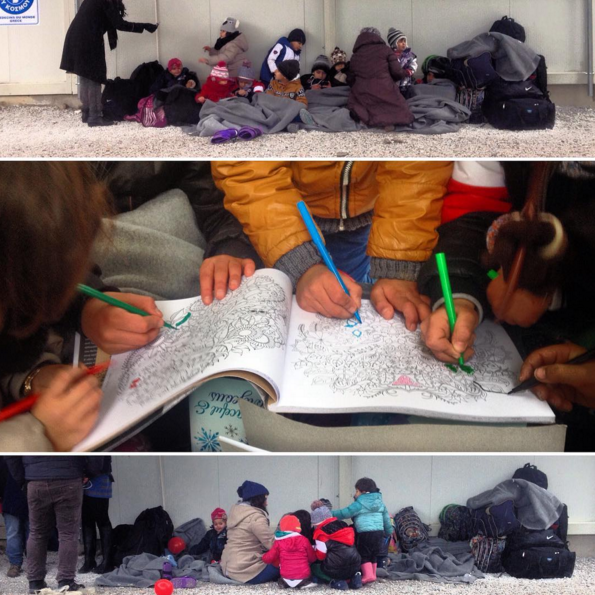 It is snowing and children are impatient. Moria campo is hardly the ideal place for children to hang out. There is nothing to play with besides stones. I decide to get paper and markers, improvise a table with a stool and 2 minutes later there are already 10 children trying to all draw at the same time on a single A4 sheet. I get more notebooks. It seems to work: parents relax two minutes, the children forget where they are, paint and laugh.

A 11 or 12 year old girl shows up, asks me for a marker and starts drawing. She pushes away the small children that try to interrupt her and concentrates on what she is doing.
I realize immediately that something strange is happening. She was not like the others. She wasn't going to paint a sun, a flower, a house ...
She began drawing bombs, planes, guns, people crying, amputated people, people with blood. 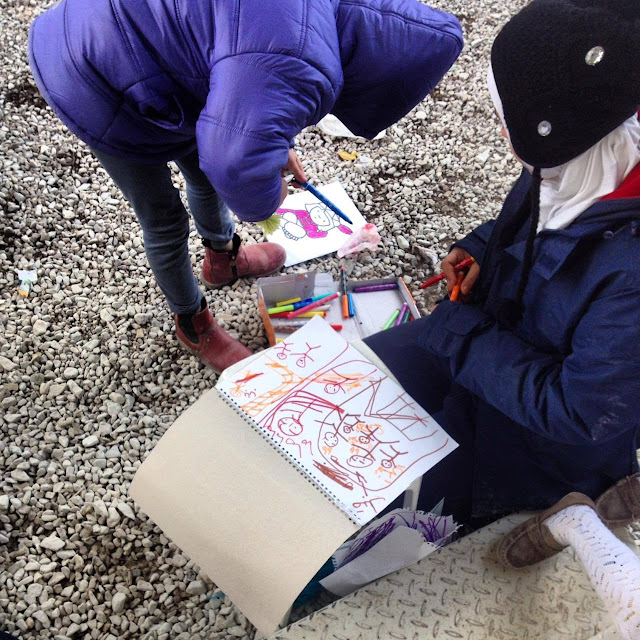 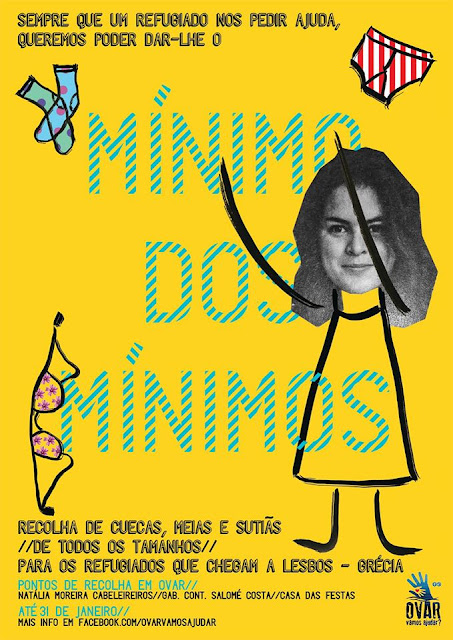 And so we are here.
We arrived on Tuesday after a long travelling day and due to the weather, we almost had to spend an unplanned night in Athens. Being at the airport, ready to board the plane to Athens, it was like being at a convention of volunteers. Although you could see some locals, most of the people getting ready to fly to Mytilini were volunteers. You can very clearly see them: they have big backpacks, sit on the floor, wear waterproof jackets, look fearless and ready to work.

We set off to work the next day, still tired but ready to start. There is someone already helping at the location we used to distribute clothes from in October, so we have been given a new location. We are in Kepe, the reception centre for Arabic speaking refugees. That means people from Syria and Iraque. This is already a big improvement, because before, only Syrians were registered here, and on the other part of Moria Camp, all other nationalities. It was very hard to organise translators in both arabic and farsi languages for the other area. This way, instead of being divided by countries, people are divided by languages they speak! It's so much easier this way! Now I can focus on learning one language: arabic.

It's also fairly nicer here. There is a courtyard and the huts hide the fences. It's almost bearable.
There's trees, an area to walk around and you can see everything that is happening around you clearly. There's even toilets for the refugees to use! This is very different from the place we were working in before! 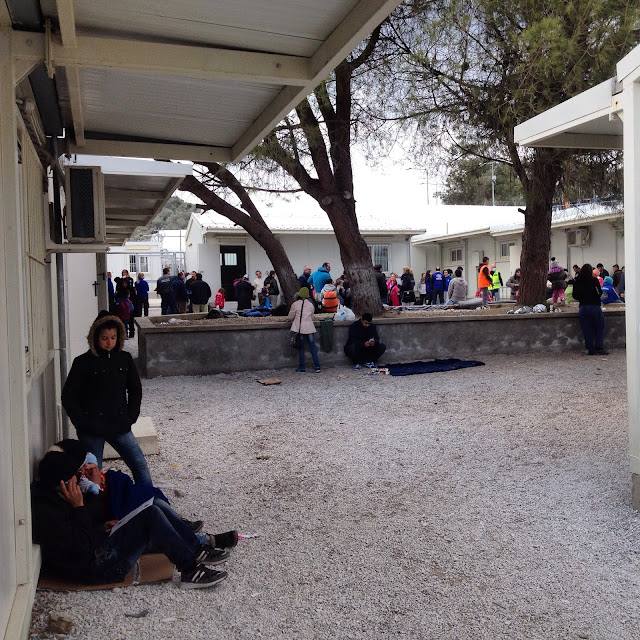 People get to wait in the courtyard until their paper is ready. After they get the paper, refugees can go to the medical clinic or come to us for clothes, before exiting the area and moving on to the next part of the journey, which is getting the ferry to Athens.

This is what the inside of our room looks like. There are clothes, shoes, milk powder, hygiene items, diapers, etc. We organise it as well as we can, but it's hard when we receive boxes full of unusable clothes. 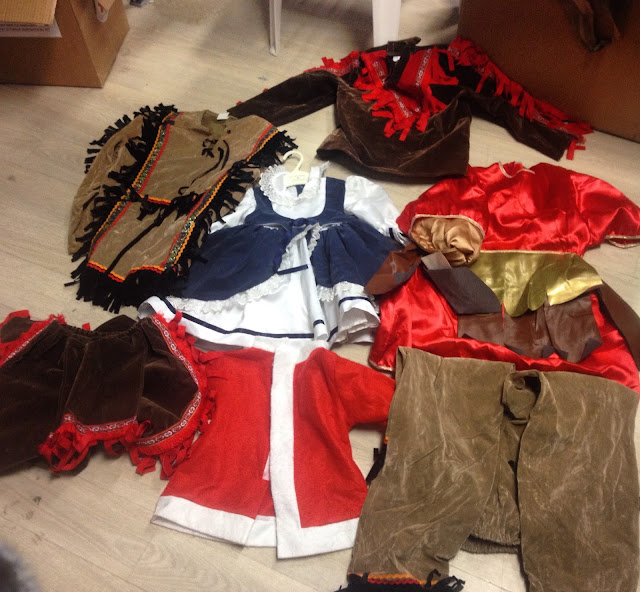 Here's an example of several items we collected from different boxes!! Costumes. Your intentions may be good, but I would feel nothing but embarrassment if I had to give these to a kid that was soaking wet. It would be like a bad joke. These items went straight to the bin. 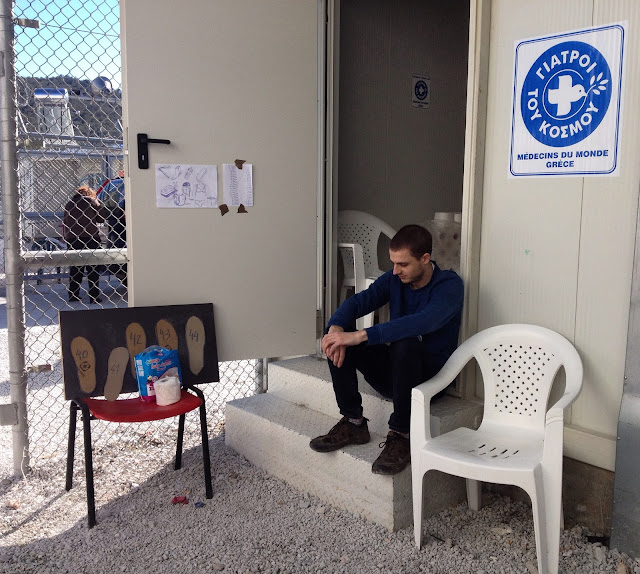